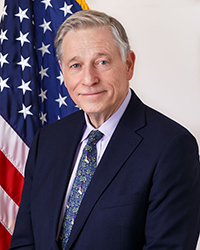 Crosby Kemper is the sixth director of Institute of Museum and Library Services. He was commissioned by the White House on January 24, 2020, following his confirmation by the United States Senate. IMLS, an independent government agency, is the primary source of federal support for the nation's museums and libraries.

Kemper is a dedicated advocate for education and learning for people of all ages and backgrounds. He comes to IMLS from the Kansas City Public Library, where as director, he established the library as one of the city’s leading cultural destinations and a hub of community engagement.

Under his direction, the library made special event programming a high-profile focus, with more than half a million people attending its evening programs or visiting exhibits in the art galleries. During his tenure, the Kansas City Public Library received multiple awards, including IMLS’s National Medal for Museum and Library Service in 2008.

Kemper also recently served as chair of the board of directors of the Schools, Health, & Libraries Broadband Coalition, which supports open, affordable broadband connections for local community organizations.

Kemper’s career began in banking; he most recently served as CEO of UMB Financial Corporation. Kemper has received the Difference Maker Award from the Urban League of Kansas City, the William F. Yates Medallion for Distinguished Service from William Jewell College, and the 2010 Harmony Humanitarian Hoffman Legacy Award. His board service has included the Kansas City Symphony, the Black Archives of Mid-America, Union Station Kansas City, the Heart of America Shakespeare Festival, the Rabbit hOle—a center promoting children’s books—and the Thomas Jefferson Foundation, which operates Monticello.

Kemper is the editor of and a contributor to Winston Churchill: Resolution, Defiance, Magnanimity, Good Will, published by the University of Missouri Press. He holds a bachelor’s degree in history from Yale University.