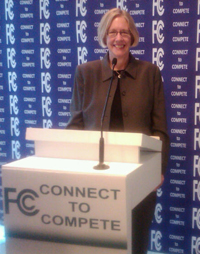 If all goes according to FCC Chairman Julius Genachowski’s plan, libraries are going to have a lot of help closing “America’s digital skills gap.” On October 12, I participated in the unveiling of Connect to Compete, a public-private partnership to turn around the problem of digital exclusion in the US.

According to the Pew Research Center, one-third of all Americans – 100 million people – have not adopted broadband high-speed Internet at home. The national announcement is the first major action by Chairman Genachowski’s Broadband Adoption Task force, created in May to help close the adoption gap. And it aligns with our work at IMLS to create new tools to help communities work together to create “digitally inclusive communities!”

I am happy to report that libraries were front and center as part of the solution. A big message from the Chairman was the need to increase the number of libraries that offer digital literacy training. There are four big reasons why libraries must be at the heart of this work:

1) Libraries have a strong geographic distribution.

Distribution of Public Libraries by State
Number of libraries per 100,000 people, FY 2009 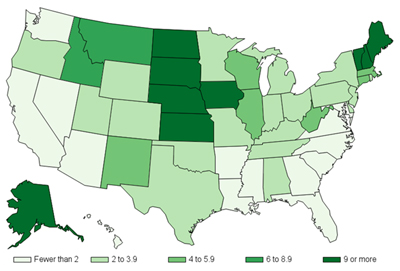 2) The public is at the library. The number of visits per capita has steadily increased over time, and since 2006 the frequency of use has increased sharply.

4)  The public has made serious financial investment in library technology in the last 10 years. That investment is particularly striking in rural areas which report 6 computers/5,000 people while urban areas report just 2 computers/5,000. That is infrastructure that must be refreshed and maintained for any digital literacy campaign to succeed.

The Chairman called for an “all hands on deck” and announced commitments from private-sector companies and the support of non-profit groups including:

To coordinate this effort, Chairman Genochowski announced that a new non-profit would host educational content, develop a database with digital literacy classes, and help train digital literacy instructors across the country.

It was exciting to see so much energy and enthusiasm to get to work in communities across the country and we look forward to the leadership role of libraries in combating the high cost of digital exclusion in the U.S.