Eureka moments are good ones, aren’t they? In a flash, an idea leaps a gap, becomes a reality, and helps to solve problems! Imagining and then hosting our first job fair at the Georgetown County Library of South Carolina last week was a wonderful instance of such success. When 150 citizens entered my public library on Saturday, July 14, 2012, they walked toward opportunity! We had an auditorium filled with employers, a new Small Business Center with resume writing classes, and a Heritage Center with practice interview sessions. Along a wall was a business fashion show courtesy of local clothing stores. Relevant books and good materials abounded everywhere. Some folks left with jobs; others with knowledge; more with renewed self-confidence. These are good things here during very tough times, for in Georgetown County, economic stress has been for five years a crippling community problem. Since October 2007, unemployment rates have doubled to nearly 11% overall and to more than 33% in some neighborhoods, foreclosures have increased five-fold, and bankruptcies have more than doubled. The job fair enabled our library to help! 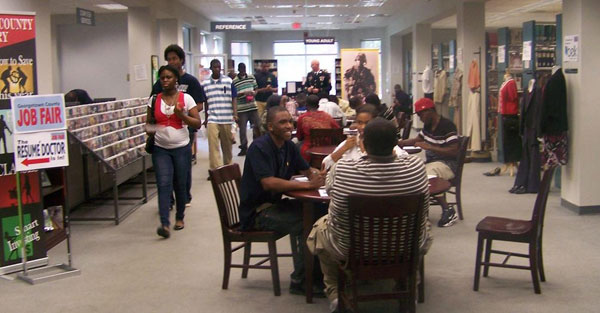 Picture at our job fair a lady who practiced her interviewing skills with me. She was perfect in so many ways: she was poised, attentive, nicely dressed, and well spoken. But when I said, “Tell me about yourself,” she replied, “There’s not much to tell. I just stay at home now taking care of my two girls. That’s all.”  It was time to probe further!  “Are you,” I inquired, “a head of household?” When she replied affirmatively, we reviewed together what it takes to lead a family during difficult days.

We agreed that it involves a measure of intelligence and determination to wend ones way through the necessary paperwork to secure a modicum of aid; that it necessitates fiscal skills and discipline to maintain a tight family budget; that it requires diplomacy and human awareness to interact effectively time and again with a wide range of potential employers and others whom one would not normally encounter during more structured and certain days as a fully employed person. We together came to the conclusion that these were indeed transferrable skills to the world of work and that enunciating them in a job interview might cause an employer to pause, to look up, and to note carefully that someone special was seated just across the desk.

Then, I asked the lady about her civic life outside the home. Did she go to church for instance? Why, yes she did. She was, as a volunteer, in charge of her church’s preschool program. She involved tots in basic motor skills activities, told them stories, read them books, played with them, and attended to their physical needs. She also maintained all records connected with the preschool and interacted continually with the parents of the youngsters. My jaw just dropped! I said, “Let’s review this again.” We developed another list of skills transferrable to a wide range of employment possibilities.

Finally, I said, “Were you ever employed in the workforce?” “Yes,” she said brightly, “until the recession, I was a mental health counselor for seven years. I had a full caseload of individuals and also interacted with patients in group sessions.”  Needless to say, I was dumfounded once more! We again made a list of the skills and abilities associated with her prior professional work that could be used elsewhere in so many, many ways.

Then, she had her own personal Eureka moment: “You know,” she said, “I’ve been turned down for job after job since the recession. I’ve always just told them that ‘there’s not much to say’ when asked about my abilities. But I will have a new approach in the future!  I can tell them about my professional life, my church work, and my family. I’ve got a lot of good things that I can say and do!”

Such positive outcomes were underscored by favorable survey results from the attendees, with 93% rating it good or excellent. Of the 14 employers who were present, all said that they would be glad to be in another job fair. Four said that they had found the right candidate for higher positions within their companies. Scores of other jobs may be filled as employers review the applications more thoroughly.

The media coverage was also exceptional with three television-station crews reporting on the event. Watch an example from Channel 13 here:

This endeavor was part of a a larger project to create a new small business center at the library to nurture homegrown entrepreneurship. Funding for the project came from the IMLS Grants to States program, through the South Carolina State Library, and from a “Smart investing @ your library® Grant” made possible by the FINRA Foundation and the American Library Association.

The Georgetown County Library will host another job fair in February 2013. Come check it out!