Home » News » Blog » A Thing of Beauty by Luisa Banchoff

A Thing of Beauty by Luisa Banchoff 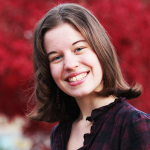 Luisa Banchoff of Arlington, Va., has defined her young life by giving back to her community through poetry. She has led a project in three Arlington schools that connects students with each other and with poetry through interactive writing on school bulletin boards. As an active, 10-year member of the Girl Scouts, she earned her Gold Award when she led a poetry workshop for fifth-graders at her former elementary school. From April 25-27,  Luisa was a featured guest at Writers of Social Justice: How One Pen Changes the World, part of the Red Mountain Writing Project in Birmingham, Alabama. She engaged in a reading and writing workshop with high school students, and participated in an additional reading at the Holocaust Museum in Washington, D.C. Below is Luisa Banchoff’s “A Thing of Beauty.”

A Thing of Beauty

Some places where
you buy it they
cover it in ribbon,
little spilling
meridians made
sharp by scissors
and your desire
for it, the edges
a peculiar geometry
between your fingers,
running it over like
jukebox buttons
that only play those
kinds of songs,
those memories that
would be 1960s dust
were it not for the
press of it against
your palm now.
Your grandson’s eyes
tell you life is a
calendar. The
small print on the
receipt says
it’s November.
Sometimes when
you shake it you
can hear bells ring,
sometimes a
muffled five p.m.
sigh or the sound of your
daughter swallowing
the moon for the first
time.  Most people,
they know that
sound, they remember
how it once slid
down their own throats,
how it never quite
felt like the
cinderblocks that are
anchored there now,
the what-a-shames
and should-have-beens.
So they focus on the
ribbons instead, jumping
like a four year-old’s
hair in the elevator,
landing like a forgotten
puzzle piece under
the table. Most people,
they unwrap it right
away, but I have
occasionally seen
the ones who live
in apartment
entryways and
empty pool bottoms
who still have not
cracked at the rims.
By day they shuffle
with it between their
feet. At night they
shake it in time to
their music, singing
of saltwater that does
not come from the
sea as the world
slowly drifts into
some kind of sleep.