In 2011, the Memphis Zoo received a grant from IMLS to fund changes to the African elephant enclosure. The zoo wished to change the flooring of the indoor elephant enclosure from concrete to a more resilient material. By doing so, they hoped to decrease any stress or discomfort experienced by their three female elephants. Elephants, just like humans, are likely to develop joint problems or arthritis as they age, and unyielding flooring like concrete can worsen these issues. 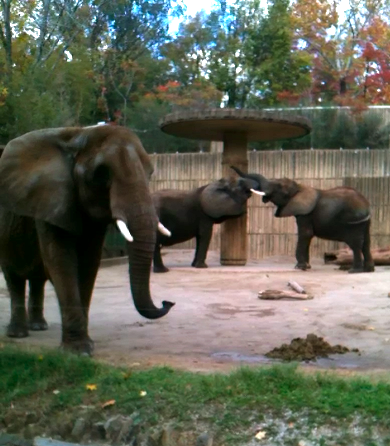 Memphis Zoo and Rhodes College partnered to study benefits of new flooring to the elephants Asali, Gina, and Tyranza.

Several months before the change took place, the zoo contacted Dr. Sarah Boyle at Rhodes College to design a behavioral study to see how the elephants responded to the change. And so a small army of Rhodes research students, including me, began to collect data on the elephants’ activities and movements on a daily basis.

I had volunteered with a research project at the zoo before, helping with amphibian husbandry. With this new project, I was excited to have the chance to experience another aspect of research, participating in data collection.

I observed the elephants for several hours a week during the school year, and in the summer I received a fellowship to continue my research full time for eight weeks. I hadn’t participated in a long-term research project before, and I came to appreciate the major commitment required to complete such a study. 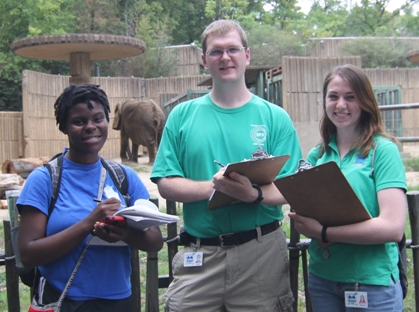 I had always heard the zookeepers describe the elephants as having different personalities, but until I made my own observations, I didn’t realize how complex the elephants and their social interactions were. Tyranza is the oldest of the three, in her late 40s, and the matriarch of their “pseudo-herd.” (“Pseudo” because the elephants are not related as they would be in the wild.) She is very laid back, but as the matriarch she keeps order over the exhibit. The next oldest elephant is Gina at 30 years old, and she was pregnant at the time of the study. The best word I can use to describe Gina is moody; she was usually the one responsible for the disorder that Tyranza occasionally had to subdue. The youngest is Asali at 28, and she is probably my favorite of all three. She seems rather naïve and easily amused, so she added some entertainment to my hours of data collection.

With the data we have gathered, we have seen some really interesting results. At least two of the elephants are sleeping more at night, and all of the elephants appear to be resting less in the daytime. It’s extremely satisfying to see that the massive amount of data we collected has been analyzed to reveal effects we otherwise would not be able detect.

I recently presented this research at a collegiate meeting of the Tennessee Academy of Sciences, and we are currently writing up our findings to be submitted for publication.

Maggie Blake is a biology major at Rhodes College. She has been involved in research at the Memphis Zoo for two years. Maggie is interested in pursuing a career in research in animal behavior and ecology.