Children Who Visit Museums Have Higher Achievement in Reading, Math, and Science

Earlier this month I had the honor of representing IMLS in Philadelphia at the annual meeting of the American Educational Research Association. Researchers, policymakers, and practitioners gathered to share cutting-edge research that will shape the future of education. The theme of the meeting was The Power of Education Research for Innovation in Practice and Policy.

At the meeting, I presented some of the research we have been working on examining the influence of libraries and museums on early learning. This analysis provides insight into the differences between children who visit museums and those who don’t, including academic achievement. The analysis was based on data from the Early Childhood Longitudinal Study, Kindergarten cohort (ECLS-K), collected by the Department of Education’s National Center for Education Statistics (NCES). Using these data, I examined the influence of children’s museum visitation in kindergarten on academic achievement in third grade.

Almost one-third (30.1%) of parents indicated that their kindergarten-aged child had visited an art gallery, museum, or historical site within the past month. However, there were differences in visitation by race and socio-economic status (SES), as shown in Figure 1. Children living in households of low SES, characterized by low levels of income and parental education, are less likely to go to museums than their more affluent peers. Children of Hispanic or Latino ethnicity were also less likely to visit. 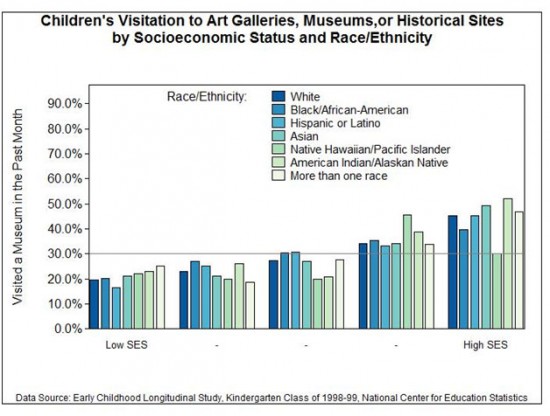 Because of these differences in visitation, I separated the children into subgroups matched by key characteristics, including income, race, and parental education. This approach allowed me to take a closer look at a specific group of children – those who were at risk for deficiencies in cognitive or social development that contribute to gaps in achievement. This also reduced the chance that differences in achievement scores could be due to other factors, such as the lack of resources found in low-income environments.

I found that children who visited a museum during kindergarten had higher achievement scores in reading, mathematics, and science than children who did not (Figure 2). These effects were small but significant. This is an exciting finding for early learning programs in museums. It is particularly compelling because we see this effect in the subgroup of children who are most at risk for deficits and delays in achievement. 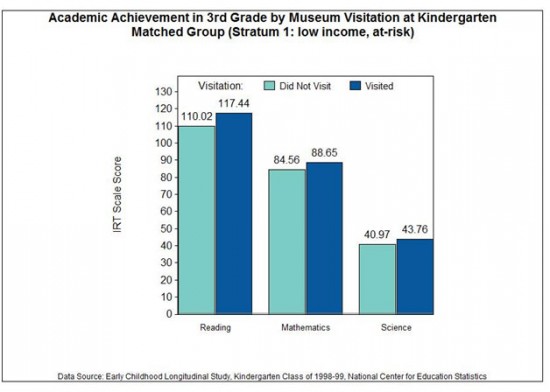 IMLS recognizes the importance of learning during the first years of a child’s life. Early learning is a funding priority for IMLS, with $4,329,567 directed toward early learning in fiscal year 2013. We support programs and research for library and museum programming for young children and their families. Libraries and museums are places in the community that provide high-quality, evidence-based programs that support the development of young children, often at little or no cost to families. This recent research reiterates the increasing relevance of these critical community assets for children who need early support the most.

These findings were presented as part of the following paper: Swan, D. W. (2014, April). The Effect of Informal Learning Environments on Academic Achievement During Elementary School. Paper presented at the annual meeting of the American Educational Research Association, Philadelphia, PA.