With more than $36 billion dollars of discounts provided to date, the Universal Service Schools and Libraries Program, commonly known as “E-rate,” helps schools and libraries acquire Internet access and telecommunication products and services at affordable rates. Over the years, the E-rate program has provided critical support to public libraries that lack adequate infrastructure, helping them maintain their role as essential information hubs in communities across the country.

While the program has been in existence for about 15 years, it has been difficult to determine just how many libraries have participated. Currently, the data that the Universal Services Administrative Company, the nonprofit corporation designated by the Federal Communications Commission (FCC) to administer the E-rate program, makes available on its public data tool lists the applicants but not the awardees associated with each application. E-rate applications are often submitted on behalf of many individual libraries and school.

However, a new data-sharing partnership between IMLS and the FCC has made it possible to identify each library connected to an E-rate application. This data, which comes from the Block 4 section of the E-rate Form application, lists all schools and libraries receiving services by name and identification number. We’ve just started digging into this data and will be producing more detailed analysis in the coming months, but we wanted to share some quick stats from our initial investigation. For this blog post we focused on 11 years of program data, from FY 2002 to FY 2012. These are years for which we have complete records.

Over this 11-year time span, 15,551 libraries participated in E-rate program. This is a much larger number than most people had previously thought. As a point of comparison there were 16,536 public libraries in the most recent IMLS Public Libraries in the United States national survey (FY2012), which is a census of US libraries. But it would be wrong to assume that these 15,000+ libraries participated in the program every single year. There are a number of reasons why a library or school may participate one year and not the next. Though some libraries apply year after year, others apply only when specific telecommunications resources and services were needed. When we looked over the 11-year period, the average number of years that an individual library participated in the E-rate program was about 7.8. 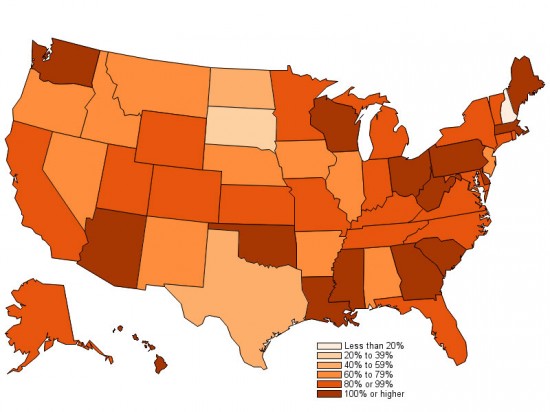 Here are some key takeaways from this quick look at library participation in the E-rate program. By examining program data over multiple years, we can see that:

Library participation in the E-rate program is very high over the life of the program, with more than 15,000 public libraries participating in the 11-year time period reviewed for this blog. More than 90 percent of the known public libraries applied for and received E-rate discounts.

With an average program participation rate of 7.8 years, we can see that most libraries stay engaged in the program over a significant period of time.

The next step in our analysis is to look at the services libraries are purchasing under the program and to examine how much support they are receiving in a given year or over a series of years. We will also be linking the E-rate program data with the IMLS Public Library Survey data to see how the E-rate program is affecting the character of public library services at the local level. So stay tuned.

[1] In this analysis a proxy participation rate was developed by comparing the number of unique E-rate program participants to the number of public libraries reported in the IMLS Public Library Survey. This proxy rate can exceed 100% because the thresholds for participation in the E-rate program are not identical to the threshold for inclusion in the IMLS Public Library in the United States survey.