Wrapping Up a Year of State Library Interviews

Over the past year, the UpNext Blog has featured dozens of interviews with state librarians on priorities for their IMLS Grants to States funds. These annual population-based grants reflect the broad legislative purposes of the Library Services and Technology Act (LSTA), but also the specific goals of each state’s five-year plan. IMLS staff conducted these interviews during the transition from one five-year plan (2008-2012) to another (2013-2017), and although the blog series showcased just half of the states, it pointed to some overarching trends.

In reflecting on 2008-2012 community needs, for example, state librarians often mentioned access—a term that surfaces multiple times in the language of LSTA. They made reference to grant-funded resource sharing systems, such as statewide catalogs and interlibrary loan delivery services. They also discussed their work at the state library level to improve Internet connectivity and implement broadband, which was facilitated during that cycle by BTOP (Broadband Technology Opportunities Program).

Statewide summer reading programs, a mainstay of Grants to States funding, were more commonly included in the previous five-year cycle than in the newer cycle. In the ways they can be adapted as vehicles for literacy-related programming or governors’ initiatives, however, so, it’s clear they’ll continue to have a place in future funding priorities. 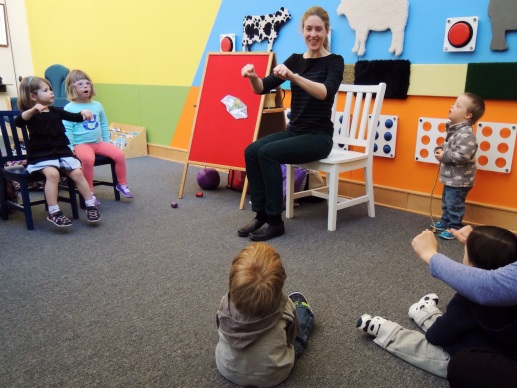 The Maryland State Library for the Blind and Physically Handicapped not only provides alternative library materials to patrons who need them, but also provides programs to enrich their educational and cultural lives.

There were several types of projects that appeared frequently in both five-year cycle plans. These reflect issues that state libraries are committed to for the long-term, and include  the purchase of statewide databases and e-books; services for special populations, such as the state-designated Library for the Blind and Physically Handicapped; and early literacy programs. Many of these initiatives ultimately respond to the need for access, as well. Several state librarians mentioned the significant cost savings achieved through database licensing at the statewide level, as well as community segments that might otherwise lose access to electronic content, including schools. They made a compelling case that Grants to States funds help them to increase equity for statewide access to information.

Another frequently mentioned priority was training to help library staff remain responsive to shifting community needs and stay current on emerging technologies. Many state libraries use grant funds to help address training needs for librarians across the state, whether through mini-grants to attend conferences, webinar technology, or consultant-based approaches.

Like many states, Illinois uses grant funds to support continuing education. Pictured here are attendees of the
Small Public Library Management Institute, a six-day training event hosted by the University of Illinois.

And what were the emerging topics of conversation around the 2013-2017 plans? Based on the economic downturn, more state librarians had workforce development projects on their list of current priorities. Digital literacy, a related topic for adults retooling their skills, also saw an increase in mentions. The emergence of the phrase “21st century skills” in the more recent plans may correspond to an IMLS focus on this topic in recent years. Indeed, several state librarians commented that they look to the agency’s partnerships and priorities to help them establish their own.

These interviews paint a current picture of Grants to States funding, which has served as the backbone of federal support for libraries in America for more than 50 years. It is the agency’s largest grant program, but due to its unique character, it sometimes lacks visibility. Through the 2014 state librarian interview blog series, we were able to bring some of this program’s impact to the fore, while highlighting the varied approaches that characterize LSTA grant making in each state.