Home » News » Blog » #NetGain: The Role of Libraries on the Web as a Public Good

#NetGain: The Role of Libraries on the Web as a Public Good

I was thrilled to be able to represent the IMLS at NetGain: The Digital Revolution Meets the Common Good hosted at the Ford Foundation in New York. The event served to kick off the NetGain Challenge, a collaboration between the Knight, MacArthur, Open Society, Mozilla, and Ford Foundations to support work that ensures the Web serves a broad common good. The Internet Philanthropy and Progress: Principles for Future Work (pdf) document issued by the foundations lays out the framework they are working from. If you are interested, videos of all of the talks have been posted online. 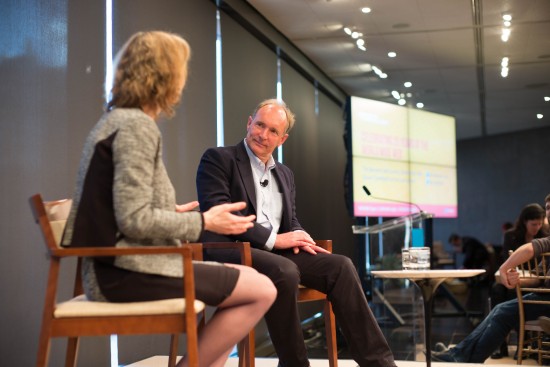 Susan Crawford Interviewing Tim Berners-Lee by Joi Ito, under a CC BY 2.0 license.

The focus on equity, public good, and access to information and information technology at the event meant that libraries were on the top of the mind for many in attendance and came into play in several of the presentations. I thought I would take a few moments to share some notes on components of the event that I imagine might be of interest to people working on these digital issues in libraries and museums.

The Web of Control or the Web of Empowerment

Throughout the event there was a focus on the duality of the web as a platform for empowerment and a tool for control. In the language of the program, the web “can be used to foster enlightenment and learning, and to promote justice.” But at the same time, “It can also be used to exert control, stifle legitimate discourse, and concentrate power in the hands of a few.” This duality frames and underscores the intention of the event and the related challenge program: the web is a powerful platform but there is a need for concentrated effort to ensure that the web of the future is one that supports a broad public good.

Darren Walker, President of the Ford Foundation, opened the event by framing issues around digital policy and the web as civil rights issues. This stream of thought ran through presentations from Alicia Garza on her work on #BlackLivesMatter and Heba Morayef on the dynamic role of social media in human rights issues in Egypt. These talks underscored the importance of increasing literacy around personal data privacy. In this vein, Christopher Soghoian discussed the need to improve the usability of data privacy tools and the need to educate people about how and why they should use them. Underscoring that issues around access to digital information like net neutrality are not partisan issues, former Republican congressmen Chip Pickering stressed the key role that a free and open Internet plays in ensuring a free and competitive marketplace. Amid this discussion of privacy in a talk titled “Locking the Net Open,” Brewster Kahle drew connections to libraries’ longstanding role of ensuring library users’ privacy and the potential that libraries have to continue to play a key civic role in these areas. 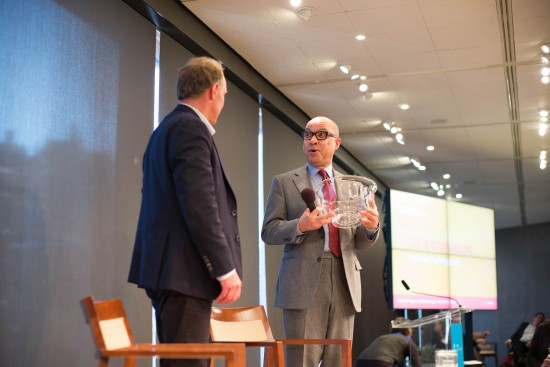 Tim Berners-Lee and Darren Walker by Joi Ito, under a CC BY 2.0 license.

The second speaker, New York City’s Mayor Bill de Blasio, began by stressing that it is critical that government, foundations, and the private sector work together to commit to make the future of the web a future that is better than our past. In this context, he stressed the important role that programs like the NYC Web Development fellowship program can play in helping Americans acquire the digital skills necessary to compete in today’s workforce. Mayor de Blasio also stressed the importance of building out public infrastructure to provide access to the web, citing a New York City program that turns pay phones into free public Wi-Fi hotspots, programs to provide high speed internet to community centers near public housing, and a program run through New York Public Library to lend out Wi-Fi enabled devices to the public.

I left the event excited to see this much focus and attention on central, civic, and social roles of libraries. Along with that, it was nice to see discussion of libraries playing key roles in these areas—recognition that libraries should continue to play those roles in the future. I imagine that the organizers of the event and the challenge would be thrilled to see extensive participation in the initial NetGain Challenge and in the future work that results from the challenge.