Exploratorium: A Compliment and a Question

Editor's Note: This is the seventh blog in a series during this National Week of Making to highlight Making in museums and libraries.

During this “National Week of Making” at the Exploratorium, our XTech program started its first week of summer Tinkering programming for middle school Bay Area youth. Last week we held training for our brand new Facilitators-in-Training who have spent two or more years with us as XTech students and are now preparing to facilitate a new cohort of students. During training we worked on some ideas for how to improve the way we facilitate our whole-group reflections at the end of a project. The idea to examine this was taken directly from two other reflection practices that are also built into the program- the daily debrief conversations amongst teen and adult facilitators, and joint reflection on research data amongst the adult lead educators and educational researchers. 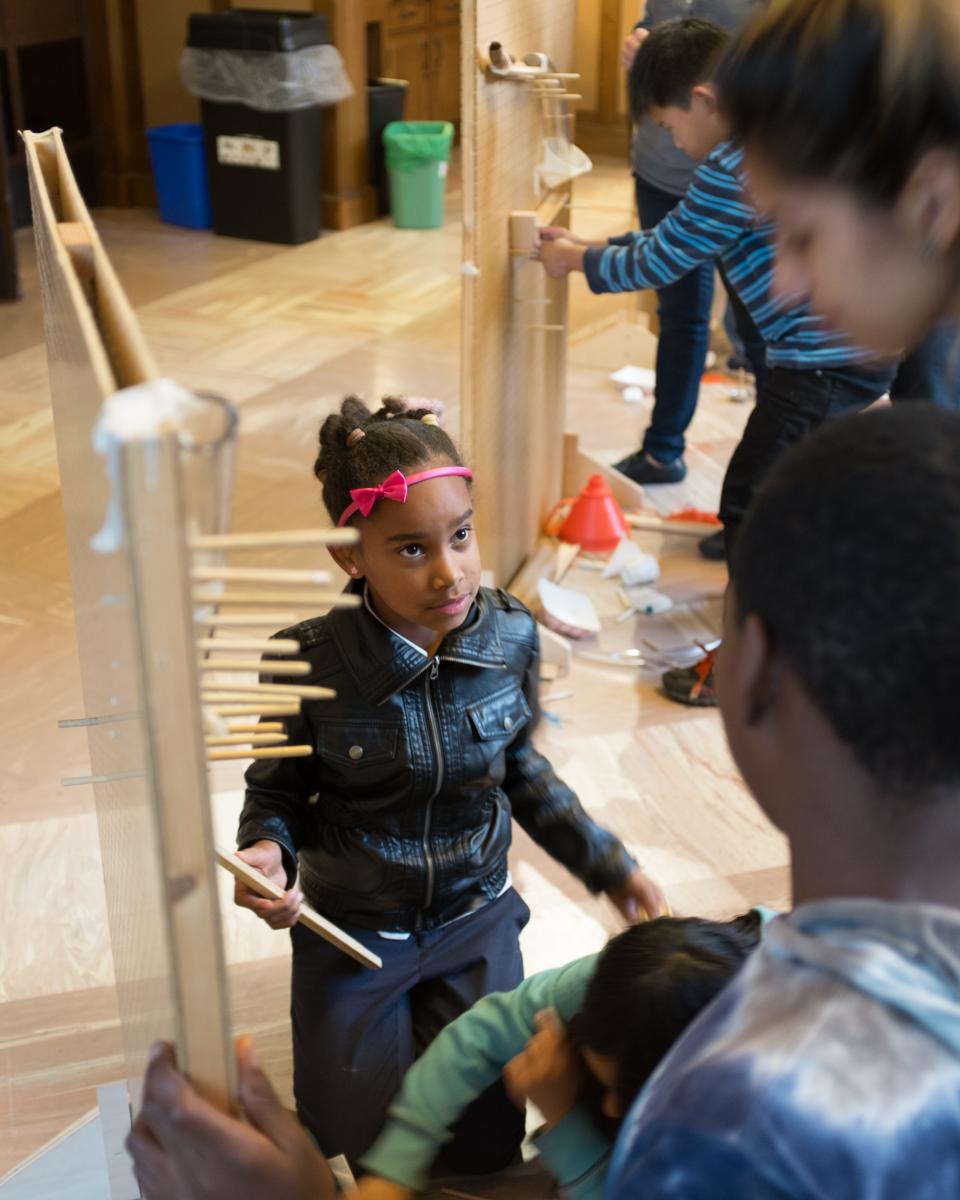 (Pictured: A student talks through an idea with teen facilitators.)

There may be a particular need for a healthy reflection space in Tinkering and Making programs. A Tinkering workshop typically includes thinking while holding materials in your hands, writing and drawing, borrowing ideas, making something and then taking it apart, staring into space deep in thought, and being in conversation with peers, teen facilitators, and adults. In all of this, we may be coming to complex new understandings about design or physics or may be developing new modes of self-expression. However, it can be difficult to carry with us the things we’ve learned from tinkering or making in a way that is visible to ourselves and others.

When XTech project reflection discussions are at their best, they are a place for youth to make sense of the concepts, problems and iterations they went through in their process of making, to articulate their creative and artistic goals, and to share wisdom with the rest of the group. They are important to building the kind of community of learners we aspire our programs to be. When they are not at their best, participants appear reluctant to speak up, there is more laughter and teasing, and it can all feel somewhat forced.

Last summer educational researcher Fan Kong spent several weeks immersed in XTech with us. In a recent joint-analysis of one of her debrief recordings, one of our teen facilitators expressed that she was uncomfortable with the silences during the whole-group reflection that day. Fan happened to have filmed that session and had the clip ready for us to watch. In fact it did seem awkward at times and we noticed students seemed reluctant and unsure of what to say. We also noticed that the facilitators didn’t have much of a role in this process. Together with Fan and XTech co-teacher Patricia Ong, we started to brainstorm ways to shift this practice to make it more comfortable and more authentic. We came up with the idea for facilitators to craft both a very specific compliment about the students’ projects and a question for each of them about their process or ideas. This way the facilitators could introduce each student to the group and help guide them in what to share. 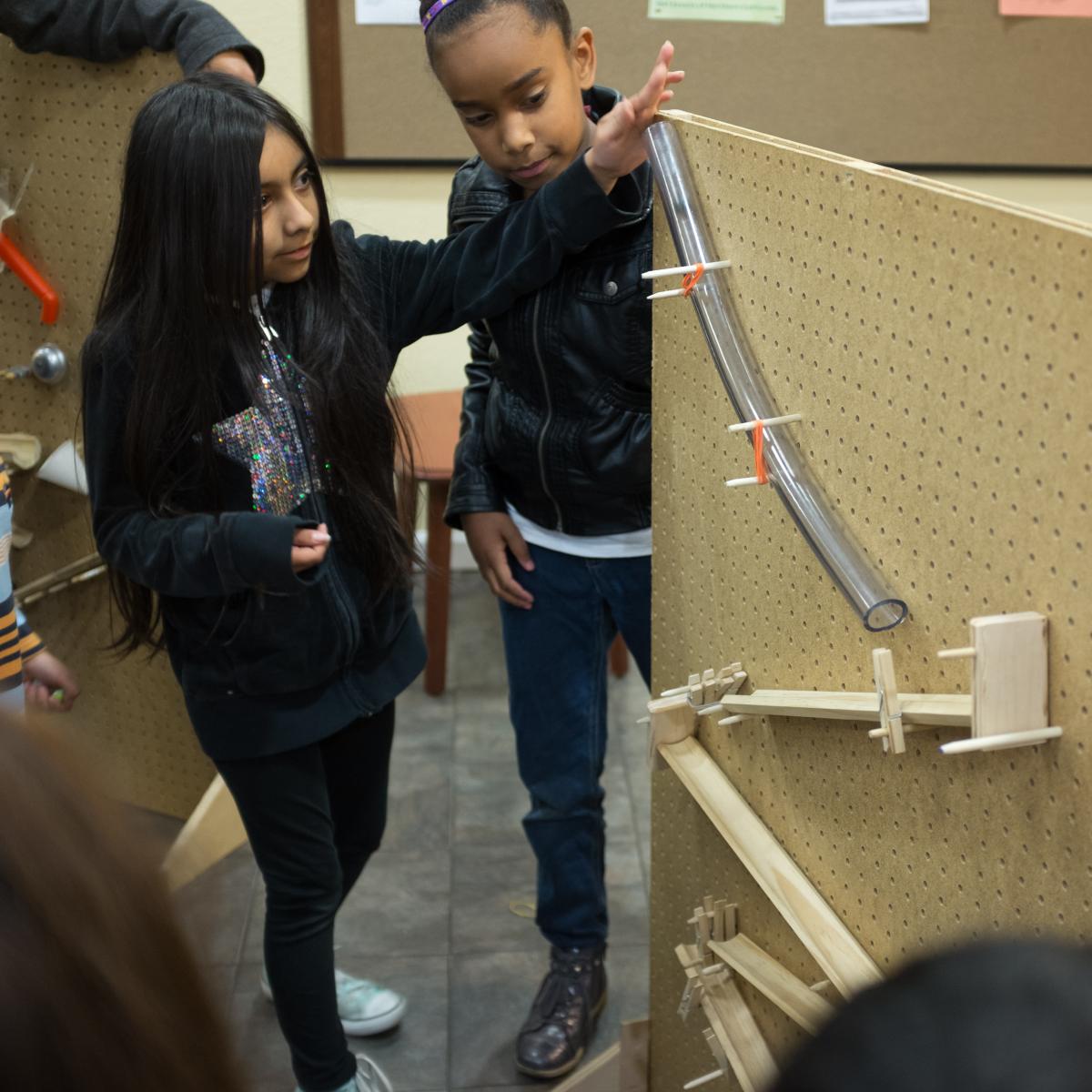 (Pictured: XTech students have more open discussions because of the 'compliment and a question' effort.)

We offered our new idea to the facilitators while doing our Marble Machines project during training. The compliments were a wonderful way to notice and recognize unique solutions and concepts. The questions were much trickier and workshopping them together turned out to be a great way to introduce the facilitators to intentional pedagogical thought. We pointed out when someone’s question received a short answer and then asked them to rephrase the question to inspire the creator to share more, stretching their own understanding of what they had made. We pointed out that some questions sounded more like critiques: ‘Why did you use that instead of this?’ After a while, the questions evolved to things like “I noticed you used rubber bands on the ends of the tracks, what are they for?” or “What inspired you to use so many bells?” These questions demonstrate authentic curiosity and resulted in a genuine exchange of ideas rather than an obligated public presentation.

We’re excited to see how this new practice of developing a “compliment and a question” opens up discussions for our new middle school tinkerers. And we’re hoping it will serve the parallel purpose of stretching the pedagogical muscles of our budding facilitators. This process might not have been possible if we had not created time for reflection about our own teaching together with the youth facilitators. They are parallel and equally important to the spaces for reflection we create for the young people who have chosen to spend their summer days building, dreaming, and inventing with us.

*Another post about this same cohort of youth is published on the Tinkering Studio blog here.

Meg Escudé is a program director in the Tinkering Studio at the Exploratorium.