“We were able to gain a tremendous amount of knowledge from an original item created here that
we no longer have in Alaska. From there, we put together a beautiful garment to share with the
community and integrate into our Alutiiq culture.”

On October 30, 2014, at the tribal Alutiiq Museum in Kodiak, Alaska, museum staff and a sewing group unveiled a caribou skin parka which the sewers constructed by hand and lovingly call "Little Lady." One of the sewers, Hanna Sholl, danced in the garment while others sang Alaska Native Alutiiq songs to welcome the garment to the museum.

“People had tears in their eyes,” said master skin sewer and team leader Susan Malutin. “They were emotionally struck by the beauty of the ceremonial welcome for the parka.”

The event was also emotional for Malutin and her fellow skin sewers Cathy Cordry, Marya Halvorsen, Hanna Sholl, and Teri Schneider. The group had worked since February of 2013 to stitch the parka for the Alutiiq Museum's collections as part of a project to help revitalize Alutiiq skin sewing traditions.

The Alaska Native art of skin sewing—in which Alutiiq garments are carefully and elaborately embellished with intricate handwork—has not been widely practiced on Kodiak since the early twentieth century. Alaska had few preserved examples of ancestral clothing to guide the group. 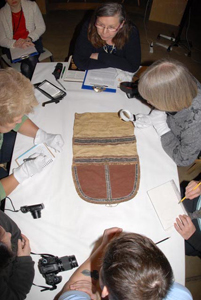 The Alutiiq museum sewers examine and document
pieces of their Tribal history during their trip to Helsinki.

The museum sent the five sewers to Helsinki, Finland, for one week to study the National Museum of Cultures’ Etholén Collection, a large and rare sample of ancestral Alutiiq skin artifacts including parkas, boots, jackets, hats, and blankets. The items come from the collection of Finnish seafarer Arvid Adolf Etholén, who amassed an array of traditional items from the Native societies of the Alaska Gulf Coast in the 1840s. “We were some of the first Alaska Native people actually from the region it was created in to see [the garments] in over 100 years,” said Malutin. 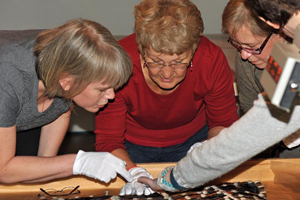 The Alutiiq museum sewers take a closer look at artifact in Helsinki.

Marya Halvorsen, a skin sewer and the museum’s cultural education specialist, expressed excitement about learning what Alutiiq garments were made from and how they were constructed to help people survive and thrive in Kodiak’s climate. However, when the group returned home to replicate the parka they had studied, it was a challenge to work from memory and photographs. “Of course, once we started, we wished we had gotten a close-up of certain angles. There was a lot of team troubleshooting. A lot of patience and care was put into it,” Halvorsen said.

Using what was learned from the trip, teams of sewers traveled to rural Kodiak schools to lead workshops on skin sewing and work with community members to produce pieces of a caribou skin parka. Middle and high school students learned five different stitches. One village constructed a sleeve, another village created the yoke, and so on. All the students signed their names on the back of the fur on pieces they helped to construct, which helped to instill a sense of community pride and ownership of the project. 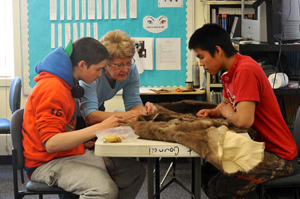 High school students working on a portion of the parka.

The adult skin sewers then assembled the parka during weekly sewing circles at the museum, and with the help of interns and community members, they completed the decoration—the final and most time-consuming step, complete with embroidery, embellishments, and faux puffin beaks. For the latter, the team turned to Kodiak High School technology teacher Barry Altenhof and a 3-D printer to replicate the bird beaks by referencing photographs. 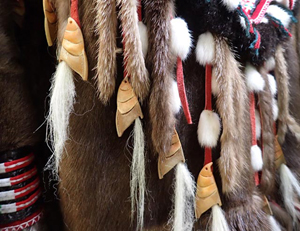 Detail of the parka shows “puffin beaks” that make noise when the wearer
moves or dances. The birds are now protected, so a Kodiak school teacher
produced replicas with the school’s 3D printer. The sewers hand painted
the beaks the right shade of yellow.

The public is invited to view the parka on Saturday, December 13, when it will be put into its display case and added to the Alutiiq Museum's exhibits, along with a project video by Kodiak videographer Alf Pryor. 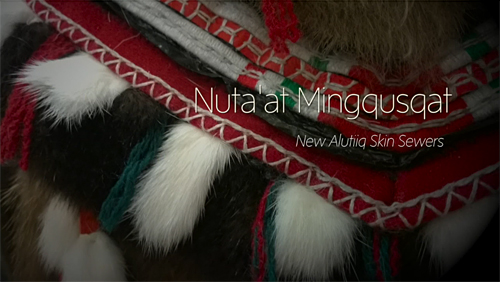 Alisha Drabek, executive director of Alutiiq Museum, said that this project helped the museum stretch beyond its walls and reach out to the community. Museum staff members have made several presentations on the project at the local Coast Guard base. Two staff members also traveled to this year’s World Indigenous Peoples Conference on Education in Honolulu for a panel presentation discussing their experience. Additionally, nine cruise ships stop in Kodiak every summer, and thousands of tourists have already learned about the project during tours.

Drabek says that the community and visitors are “embracing the opportunity to see the fur and learn about indigenous animals, and are really excited about how we are caring for traditions and revitalizing an art.”

Next, the Alutiiq Museum plans to exhibit an historic Alutiiq kayak borrowed from the Peabody Museum of Archaeology and Ethnology. Staff will develop an education program around the kayak based on key learnings from the skin sewing project. This initiative will expand upon the previous project’s use of interns and outreach to rural communities as a means to empower young students to learn about and participate in Alutiiq traditions.