Our Award Winning Libraries and Museums Are Welcoming New Americans

Every year, a high point for us at IMLS is the presentation of the National Medals. The National Medal for Museum and Library Service shines a national spotlight on the many ways libraries and museums make a difference in the lives of children, families, and communities across the country.

Our medals ceremony features community members from each winning institution; individuals whose lives have been profoundly changed by their library or museum. We tell their stories to put a real face on the value of the programs and services of these outstanding institutions. These community representatives come from all walks of life. They may be young and just finding their passions or they may have traveled many miles on their life journey. Many faced struggles that are familiar to others in their community: reintegrating into society as a veteran, raising a child so she is ready to succeed in school, or completing high school and getting into college. 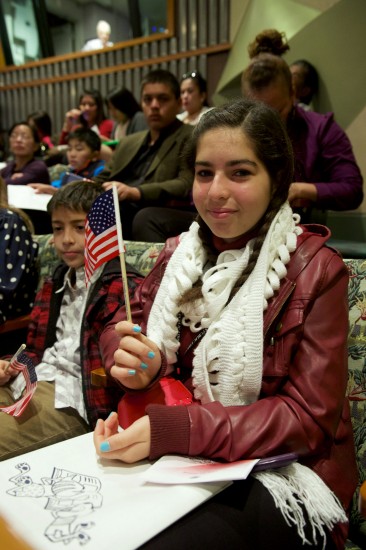 In January 2015, 80 children representing 23 countries were sworn in at naturalization ceremony at LAPL’s Central Library.

Two stories this year, the stories of Sergio Sanchez, representing the Los Angeles Public Library, and Maria Cortes Ruiz, representing the New York Hall of Science, resonated in particular with IMLS and our efforts to help institutions provide services to immigrant communities. Both these institutions are modeling programs that provide immigrant communities gateways to citizenship, financial and health resources, literacy learning and education, and career opportunities in science and technology. 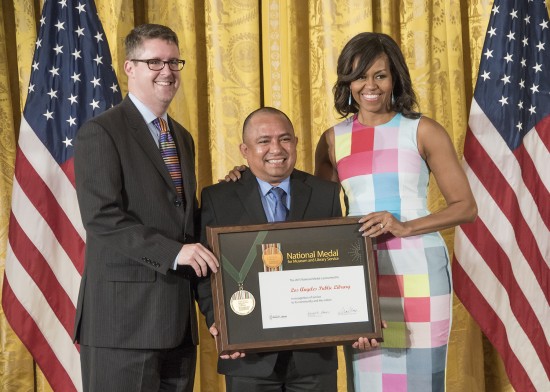 Sergio Sanchez and his wife, Francisca, came to the U.S. from Veracruz, Mexico, 24 years ago. They first brought their son to the Los Angeles Public Library for storytime as a toddler and then continued to bring him for many years. Last year, a staff member helped Sergio enroll in a citizenship class at the library, and with help of library staff and resources he passed the test and became a U.S. citizen. He encouraged Francisca to enroll, and she passed the citizenship test five months later. Sergio is now pursuing his GED (while Francisca has already completed hers) and using the library’s resources for support; their son is at a university studying to become a chemical engineer and volunteers at the library when he returns home. Sergio said, “When a new family moves into the neighborhood, I tell them the most important place is the library. A place where everyone belongs and is welcome, and where your dream can come true.”

The Los Angeles Public Library’s “Path of Citizenship” program has led more than 13,500 people into the naturalization process, while providing services that address the larger issue of immigrant integration. The library created Citizenship Corners in all 73 of its locations with resources in multiple languages and with library staff trained in the naturalization process. With resources from the U.S. Citizenship and Immigration Services/IMLS partnership, the library established a model for other cities. Los Angeles is building on the success of the program and has joined with New York and Chicago to launch “Cities for Citizenship,” a major nationwide initiative to increase the rate of naturalization. The Los Angeles Public Library now addresses other issues of immigrant integration, with new and expanded programs on literacy, financial, and consumer health and education. 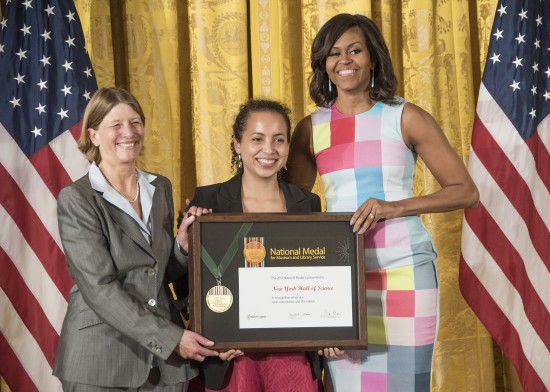 In 2012, Maria Cortes Ruiz moved to the United States from Bogota, Colombia. A few months later, she began working at the New York Hall of Science (NYSCI) in Queens, as an Explainer Trainee in the Science Career Ladder program. She said, “The support and the opportunities I have received working at NYSCI have made my migration to America smoother and more comfortable. At NYSCI I enhanced my English, and my communication and leadership skills at the same time I was able to learn and teach about science, which has always been one of my biggest passions.” She is now a Design Lab Resident, where she leads workshops, researches background material for educational projects, and prototypes hands-on activities for museum visitors. Maria attends City College of New York, studying chemical engineering. She says her experience at the museum helped her expand her network and reinforced her decision to become a chemical engineer.

NYSCI’s 30-year old Science Career Ladder program employs high school and college students to work as Explainers on the museum’s floor, engaging the public, conducting science demos, and facilitating programs. Most Explainers are from local neighborhoods, with 76 percent from first-or second-generation immigrant families and 74 percent from low-income households. A typical cohort of approximately 100 Explainers speaks, on average, 23 languages. The program is part of a larger multifaceted initiative, NYSCI Neighbors, that has engaged more than 700 families, a network of 16 local school partners, and 16,000 annual program participants who reside within a two-mile radius of the institution, many of whom are first-generation immigrants.

Other medal winners have successful programs that serve immigrant communities, including Embudo Valley Library and Community Center and the Museum of Northern Arizona. I encourage you to check out all the winners and community members’ stories on our website and learn more about how you can nominate your museum or library for this prestigious award.