Winds in excess of 100 mph pounded on the 64 two-by-three windows in the 130-foot-arc forming the south face of the building on the Perkinston Campus that houses the Mississippi Gulf Coast Community College (MGCCC) Archives. The glaziers said the new windows would withstand gusts up to 130 miles-per-hour. I can attest that the windows held against all Hurricane Katrina could throw during that endless day of August 29, 2005.

In addition to the MGCCC institutional archives holdings, I had about 1,500 Dixie Press Collection photos from Cheri Dillard of Gulfport and about 22,500 images from the Hamill family in Biloxi. 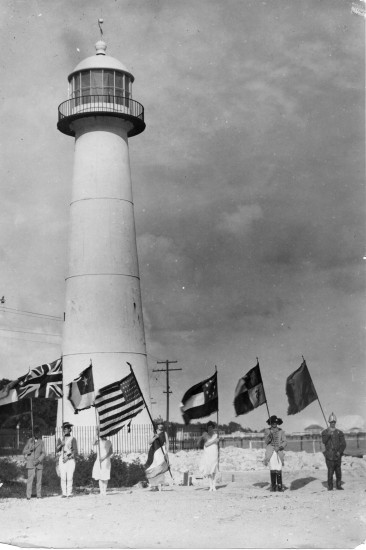 In March 1939, Coast cities commemorated the 240th anniversary of the Landing of D’Iberville. Biloxi staged a pageant titled “Biloxi Under Seven Flags.”
The flags are (from left) the current state flag of Mississippi (since 1894), the British Union Jack, the Mississippi State Magnolia Flag of 1861, the United States Stars and Stripes, the Confederate Stars and Bars, the Spanish Lions and Castles, and the French fleur-de-lis. (Note Frenchman holding Spanish flag and vice versa.) The flag of the Republic of West Florida, (also known as the Bonnie Blue Flag) which consists of a white star in the center of a blue field, was added later to bring the total of flags to eight. Actually, the canton corner of the Mississippi State Magnolia Flag of 1861 is a small version of the Bonnie Blue flag.
Mississippi Gulf Coast Community College Dixie Press Collection.

The Hamill home stands on a bluff two hundred yards from the Treasure Bay Casino in Biloxi. The Dixie Press building is only three blocks from the port of Gulfport.  As I sheltered from the hurricane with half of each collection well inland in Perkinston, Mississippi, Katrina went after the other two halves on the Coast and missed!  But I did not know this at the time.

I thought all of the Gulfport and Biloxi photos had been destroyed. It took four months for me to summon the courage to call the Hamills. Cindy Hamill, daughter of Marge and Tex Hamill, who had published Down South Magazine from 1950-1980, answered. I told her that the half of her parent’s collection I had at Perkinston was safe. She said “The other half is safe, too. Come and get it.” Emboldened by the Hamill miracle, I called Cheri Dillard of Dixie Press and learned that her collection had survived as well. Soon both entire collections were safe at the MGCCC Archives. 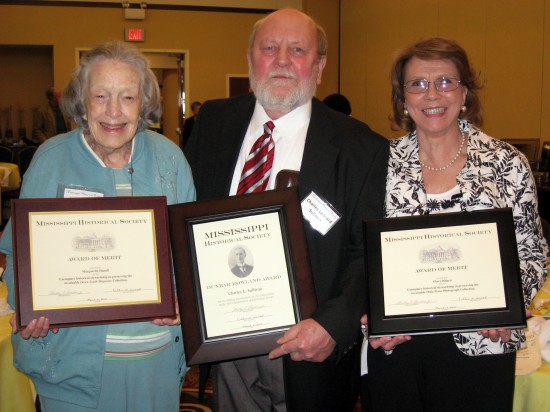 From left: Marge Hamill, widow of C.C. "Tex" Hamill, Charles L. Sullivan and Cheri Dillard, owner of the Dixie Press at the Mississippi Historical Society meeting on March 6, 2010 in Gulfport. Sullivan was given the Dunbar Rowland Award and Dillard and Hamill each received Awards of Merit.

In 2010, the archives secured a $100,000 grant from the Institute of Museum and Library Services (IMLS). That grant enabled us to complete the preservation and captioning of the premiere photographic collections of South Mississippi.

Images from both collections have already been secured by the Smithsonian Institution, Field Museum, University of Ohio, Mississippi Department of Archives and History, Biloxi Visitors Center, and Beau Rivage Casino of Biloxi. A Beau Rivage official reported to me that one woman was so overcome by the images she saw that she burst into tears. We cannot rebuild the pre-Katrina Coast, but we can show you what it looked like. Seeing it is a poignant experience to say the least.