Climate Change and Plants—Predicting and Planning


“Conservation of plant diversity is central to the mission of the Missouri Botanical Garden and the
results from this IMLS-funded project will position us to become a leader among botanical gardens
in understanding the effects of climate change on plants and how we can best conserve them in
the decades to come.”

“Climate change is controversial. But, the growing dialogue around it is very promising,” said Adam Smith, global change biologist at the Missouri Botanical Garden’s Center for Conservation and Sustainable Development. When he presented his work on the study of plant populations’ response to climate change in a small town bar to an audience of Rotary club members, half of whom were climate deniers, he found positive discourse. “It was one of the best conversations I have had about my work. People were very respectful.”

Researchers at botanical gardens are taking the lead in expanding the dialogue. The Center for Plant Conservation (CPC), a network of 39 leading botanic institutions dedicated to preventing the extinction of U.S. native plants, estimates that even disregarding the effects of climate change, nearly 30 percent of the U.S. flora is already threatened with extinction.

Conservation biologist Dr. Matthew Albrecht and fellow researchers at the Missouri Botanical Garden, where CPC is based, realized that the global extinction crisis required a rapid response from botanical gardens and arboreta that serve the broader conservation community in the United States.

To help these botanical gardens and arboreta assume a leading role in preventing the extinction of plants in a rapidly changing climate, IMLS awarded the Missouri Botanical Garden a National Leadership Grant to assess how climate change might alter the risk of plant population and species extinction in the Southeastern U.S.

Researchers usedspecies distribution models to predictclimate change vulnerability, and then conducted field transplant experiments with species identified as vulnerable to climate change to understand which environmental factors might limit their distribution and ability to expand their geographic ranges.

This research combines bioclimatic modeling and innovative experiments to shed light on key questions concerning the impacts of climate change on plant diversity, with the aim of helping conservationists in developing scientifically based protocols to avert the loss of species.

Using a dual approach, the project team used computers to assess both current and future threats into the year 2050 to determine which species and populations were most in danger within the selected geographic area, the U.S. Interior Highlands.

Smith, the primary research fellow on the project, describes the study zone as two regions resembling a pair of human lungs; on the left, plant life surrounding the Ozark and Ouachita Mountains, and on the right the Central Basin of Tennessee and middle Appalachians. 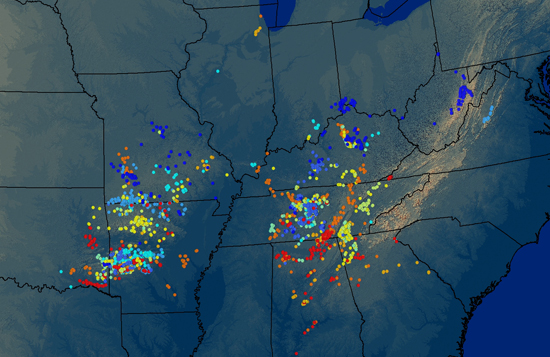 To set up the models predicting plant populations’ responses to climate change, Smith and the team needed species records and environmental data. The botanical garden has worked closely with state heritage programs to maintain data on rare plants, and the team partnered with nonprofit NatureServe, which provides proprietary wildlife conservation-related data and tools, to source the data used in the project.

“It took a lot more computing power than we had thought. Originally, we planned to use one computer, but it ended up taking three computers running full-time, at full power for two years,” said Albrecht. Additionally, due to data constraints, the botanical garden completed only 79 species out of 106 they had intended to process.

The 79 include a variety of plants, including herbs, trees, and grasses. Many live in specialized habitats called glades, areas with shallow soil. The study found that across the board, almost all species will suffer a decline in suitability of climate—shown both in models predicting optimistic and pessimistic climate change scenarios.

They observed that climate change is especially detrimental to these plants because they are geographically restricted and will not be able to move to more favorable climates. The models revealed that these species will suffer significantly under climate change. In the future, botanical gardens may be the only habitats left in which they can live.

“Our goal is to seed bank the most vulnerable species. Ideally, we want these populations to survive in nature, but if something were to happen to them, we will not have lost them completely,” said Smith.

Seed banking (simply put, storing frozen seeds in a protective environment) has advantages of ease of storage, economy of space, relatively low labor demands and consequently, and the capacity to maintain large samples of genetic material at an economically viable cost, according to the Botanic Gardens Conservation International.

However, there are more than 4,000 populations within the 79 species studied in the project. The botanical garden only has the resources comprehensively bank up to 10 species each year.

As the primary audience of the project, other botanical gardens received the project’s findings with praise and enthusiasm. Upon hearing about the research at conferences, other conservationists and scientists expressed the need for these types of studies, as well as toolkits that can be developed to replicate them at home institutions and local geographies.

According to Albrecht, this is one of the broader impacts of the project. The botanical garden has since posted findings, held workshops, and shared the distribution models developed during the study. Smith developed a vulnerability assessment for the project that other institutions can now use to prioritize their own efforts.

At the annual meeting of the Ecological Society of America in 2013, Smith presented a spin-off of the grant project, a preliminary version of a chaperoned assisted migration plan to relocate endangered species collected in the wild to botanical gardens. He continued to build a more detailed proposal with colleagues at Botanical Gardens Conservation International, and also presented the proposal at the Global Botanic Gardens Congress in Dunedin, New Zealand.

This led to a partnership with the University of Helsinki Botanical Garden in Finland to further investigate the feasibility of chaperoned assisted migration. Similarly, after being invited to give a seminar at the National Symposium Center for Plant Conservation, Smith has begun collaborating with the Archibald Biological Station in Florida.

Although interest is robust within the conservation community, the public is a tougher audience to reach. Despite nearly one million visitors to the garden a year, most do not know about all of the research and work going on in the offices around the physical attraction of the botanical garden.

“People are surprised that plants can be endangered. Usually they think of bald eagles and other animals, but not plants,” said Smith. “Hopefully, presentations of our work have opened an avenue for people to be thinking more about conservation in general.”

A large part of their work looks toward the future. However, with each Rotary club presentation, featured talk at the Missouri Botanical Garden’s Science Café series, and public lecture to lay groups interested in conservation, Smith and Albrecht persist in growing the dialogue in the present.