Pictured above:  Brianna Austin, a librarian with the Denver Public Library, works with participants during an in-library migrant education activity sponsored by Project SPELL.

Engaging Low-Income Families and Their Children

Realizing that low-income parents experience access barriers to their local libraries, Beth Crist, Youth & Family Services Consultant, and her team at the Colorado State Library wanted to learn how to break down those barriers. The little research that had been done called attention to the fact that libraries do offer early literacy programs for parents and children, but they were not being used by the populations that needed them most. In 2012, the Project SPELL (Supporting Parents in Early Literacy Through Libraries) team conducted a year-long study through an initial grant from IMLS to identify solutions for addressing low literacy among children from low-income families. The study resulted in the creation of a Blueprint (PDF, 290 KB) of promising practices for libraries and other agencies to use in delivering early literacy information and resources to low-income families with young children. Through practices outlined in their Blueprint, phase two of the project, “Putting SPELL into Action,” launched in October 2014. 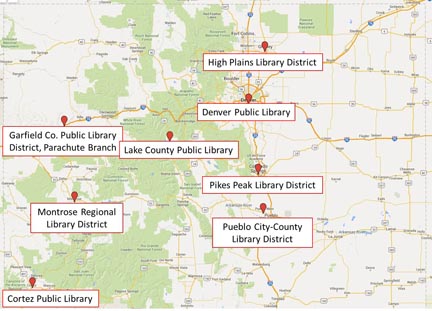 Caption: Project SPELL libraries are spread through out the diverse landscape of Colorado, serving different populations of low-income families.

One unique characteristic of Colorado is its diverse populations. “There are languages I hadn’t even heard of before I started working on this project,” said Courtney Vidacovich, Project SPELL research analyst. Because of the diverse demographics, Project SPELL’s team knew that whatever solution they devised would not be of the “one size fits all” variety. The team enlisted eight libraries across the state that represented the diversity, deeply enriching the project and its outcomes.

In working with their robust list of partners like the Colorado Libraries for Early Literacy and Reach out and Read Colorado, the eight libraries devised their own prototypes to carry out Project SPELL’s mission. The prototypes included different activities both for parents and children, in and out of the library, to promote early childhood literacy in young children. With the help of site check-ins, monthly surveys, and feedback reports, each library transformed their programs into the missing puzzle pieces that their respective communities needed.

Although each prototype was vastly different, one barrier was found in all of the library populations – library fines for overdue books and materials. Knowing this, Project SPELL has encouraged those libraries across the state to do away with the fines all together. Some libraries have, while other libraries have eliminated fines for children’s books.

Lizz Martensen, children's librarian at the Montrose Regional Library District, said, “I overheard a mom tell her son they couldn’t go to the bookmobile because they had fines that she couldn’t pay. I was gently able to stop her and explain that we are more than willing to remove those fines so they could check out books. She was astonished and thrilled. We now see them in the main branch of the library as well as Tuesdays on the bookmobile.” 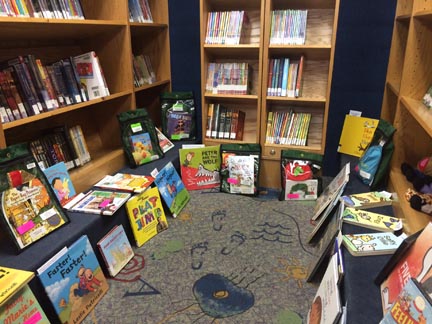 Montrose Regional Library District serves a community where 14.7 percent of the population lives below the poverty line. Partnering with Montrose Early Childhood Center (which serves populations of primarily low-income families) the Montrose Bookmobile visited the center once a week during the morning and afternoon drop-offs, catching parents and caregivers at a convenient time, introducing them to a library in a welcoming, more casual environment.

Martensen said, “One of the little girls who comes to the bookmobile during our school year stop was so excited to bring a friend on the bus [one] week. She just chatted away, introducing her friend to the staff on the bus and showing her around. She was so excited to share the experience of the bookmobile with her friends and we were impressed by her knowledge. This is the best advertisement, getting kids excited so they get their friends excited.”

Each semester, the teachers at Montrose Early Childhood Center test their students and parents. In the most recent test, the center reported that the center’s literacy score rose 15 percent, noting that nothing had changed other than the additions of the bookmobile visits. 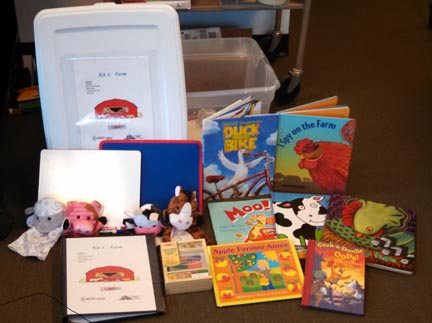 Caption: Sample launch kits, such as this one from Pueblo City-County Library District, are part of most of the participating libraries’ introductory packages to Project SPELL participants.

The End is Just the Beginning

By the end of the project (slated to conclude in September 2016), Project SPELL will have trained and mentored 40 library and early childhood agency personnel throughout Colorado.  Through their online monthly reporting system, positive feedback pours in, giving validation and inspiration to keep the program going. “I’m pretty sure this is why my child loves books,” says a Project SPELL participant.

Project SPELL’s team eagerly awaits more robust results, hoping that library programs were built with sustainability in mind, to keep the programs going long after the project ends.  Additionally, the team hopes to continue advocating for libraries across the nation using project results.