Editor’s Note: This is the second post in a four-part series highlighting recent awards made by the Office of Library Services in the National Digital Platform priority area, through the National Leadership Grants for Libraries program and the Laura Bush 21st Century Librarian program. In particular, this series will explore trends in this portfolio as emergent themes in this work develop dialog between the agency’s priorities and the insights of our applicant and expert peer reviewers. To learn more about each project, click on their IMLS log number for links to components of their grant application.

This year, we were excited to see a critical mass of proposals for projects to increase digital skills of librarians and archivists under the Laura Bush 21st Century Librarian program (LB21). These proposals serve to round out our investments in National Digital Platform tools and infrastructure by ensuring that the library workforce will be prepared to adopt, use, and build upon these systems. They reach audiences nationwide, including current LIS students, recent graduates, and experienced professionals.

The awards highlighted in this post total over $1.5 million, representing a substantial investment in this area of work. All four of the following projects align with the advice given in last year’s National Digital Platform convening and subsequent summary report: they are collaborative, they build on previous work in their respective areas, and they rely on hands-on experience as a key component of learning. In particular, three of the funded projects build on the successes of the National Digital Stewardship Residency (NDSR) program, several cohorts of which have been funded by LB21 grants in the past. 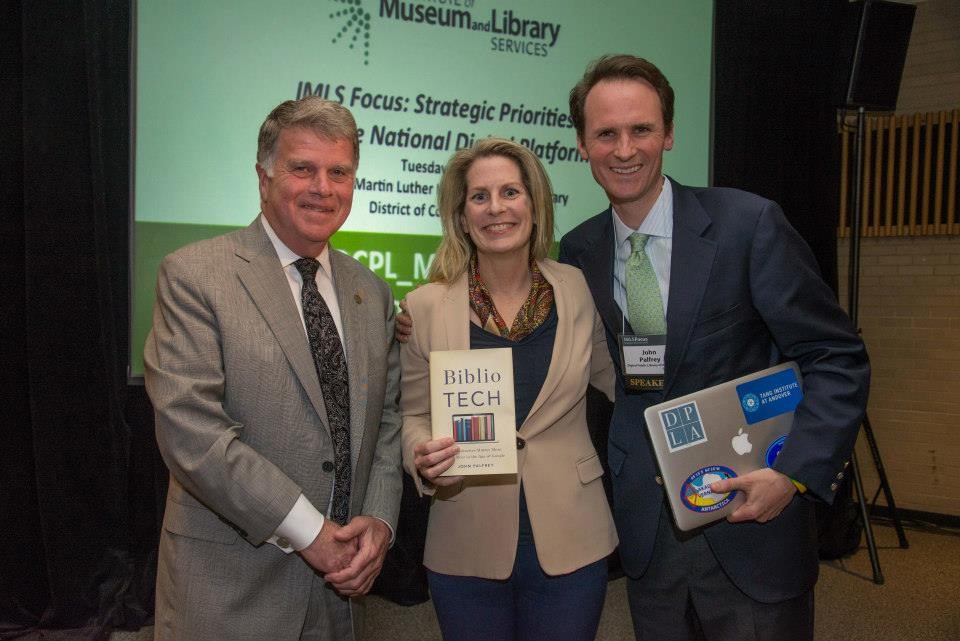 (Pictured: Maura Marx, Deputy Director of the Office of Library Services, David Ferriero, the Archivist of the United States and John Palfrey, Digital Public Library of America Board of Directors at last year’s NDP meeting. Two convenings on the topic of the National Digital Platform have been held as part of the IMLS Focus series. The first was April 29, 2014 at New York Public Library; the second was April 28, 2015 at the DC Public Library’s Martin Luther King Jr. Memorial Library. Meeting agendas, session recordings, and other materials are available on the IMLS website.)

A $690,858 award to the University of Washington Information School (RE-40-16-0015-16) will support both new students and practicing professionals in developing skills related to open data. With the goal of reaching over 100 students and at least 60 working professionals, the training developed through this program has the potential to impact open data management nationwide. Participants will learn to curate collections of open data of value to local communities, build infrastructure and preservation environments needed to sustain open data collections, and collaborate with open data providers on advocacy and outreach activities.

In addition to collaboration with UW’s eScience Institute and Technology & Social Change Group, this project has a substantial number of external collaborators, whose staff will serve as mentors for hands-on instruction and field experience. These partner organizations include the Seattle Public Library, Washington State Historical Society, Washington State Department of Transportation, and the Washington State Office of Technology.

This award is an exciting combination of higher education and continuing education, creating resources for both current students and working professionals, as well as developing open educational resources for additional users. As data literacy and open data are areas of increasing interest for libraries and users alike, it will be vital to build capacity among librarians in all stages of their careers. In FY15, IMLS awarded several grants toward this goal, including to Creative Commons (RE-00-15-0116-15) and the Brooklyn Public Library (RE-06-15-0050-15).

The first National Digital Stewardship Residency (NDSR) cohort was hosted in Washington, DC in 2013-2014 via an interagency agreement between IMLS and the Library of Congress. Since that time, several more NDSR programs have been funded through the Laura Bush 21st Century Librarian Program: NDSR-NY, run by Metropolitan New York Library Council (RE-06-13-0057-13); NDSR-Boston, run by Harvard Library and MIT Libraries; (RE-06-13-0055-13), and NDSR-AAPB, run by WGBH (RE-06-15-0039-15). Additionally, IMLS funded the Council on Library and Information Resources to conduct an evaluation of the program (RE-00-15-0107-15), which will conclude later this year.

As with any model, we’re interested in how to refine and replicate the successes of NDSR so far. Among this year’s LB21 grants are three projects that will do just that. We funded two new NDSR programs, both of which will host residents nationwide: one will be administered by the Ernst Mayr Library of the Museum of Comparative Zoology, Harvard University (RE-40-16-0082-16), and the other will be administered by the Philadelphia Museum of Art (RE-40-16-0105-16). These projects will increase the geographic diversity of the program and serve to bring the NDSR model into new disciplinary areas, specifically art and science.

The NDSR program administered by the Ernst Mayr Library will specifically focus on the Biodiversity Heritage Library (BHL), with residents placed in five BHL partner organizations. Resident projects will contribute to the development of the BHL platform, giving participants hands-on experience in areas like crowdsourcing, content analysis, and biodiversity collections. Residents will be able to benefit from the BHL’s track record of national collaboration, as well as its existing technical infrastructure.

The NDSR program administered by the Philadelphia Museum of Art will build on another existing network through its partnership with the Art Libraries Society of North America (ARLIS/NA). Residents will complete projects at art and cultural heritage libraries across the country, increasing the functionality and accessibility of their host institutions’ digital content and services. Mid-career mentors at each institution will also have the opportunity to participate in training, and curricula developed for this program will be distributed nationwide by ARLIS/NA. One particularly exciting note about this project is that it was funded jointly by LB21 and the IMLS National Leadership Grants for Museums program, given its strong potential to increase capacity for digital stewardship in museums nationwide.

As we continue to invest in this model, it is crucial that we continue to examine and reflect on the successes and challenges of the NDSR program so far. To that end, a $100,000 grant to Metropolitan New York Library Council (RE-43-16-0067-16) will support a coalition of NDSR administrators in hosting a collaborative symposium focused on evaluating and sharing the work performed over the first four years of NDSR programs. By bringing together NDSR stakeholders and other interested parties, this project will result in a handbook of agreed-upon NDSR standards and guidelines.

These four projects show a strong momentum towards expanding the resources available for librarians seeking to expand their digital skills.

Emily Reynolds is a program officer in the Office of Library Services who works on broadband issues.